4 Comments
Dan Maguire kissed a pig as part of a fundraiser to raise money for the employees of Wellspring to have a staff retreat and team building day.

When Dan Maguire’s mother died, he didn’t know how to cope with the loss. At just 15, he turned to drugs and alcohol, leading to an addiction that lasted more than a decade.

But he was one of the fortunate ones.

“I was finally able to admit that I had a problem and needed help after 13 years—and when I did, I had a place to go,” said Maguire, one of the principals of Black Hills Insurance Agency in Rapid City, South Dakota. “I entered an inpatient treatment center for 30 days. It was the best decision I ever made.”

Helping others with similar challenges

And it’s why today he is such a supporter of WellFully. The Rapid City nonprofit is the only group home and chemical-dependence center for youth ages 9-17 in western South Dakota. It has been a place of hope for more than 8,000 young people since its inception—individuals who otherwise were likely to end up in the system—or worse.

‘To be able to give [these kids] a glimpse of hope, to see the light of life come back into their eyes, is truly a gift for me as much as it is for them.’

Maguire has been on the WellFully board for more than a decade, serving as president for five years. He played a key role in the funding and planning of a much-needed new facility, and has rallied support from Black Hills Insurance Agency and others in the business community. 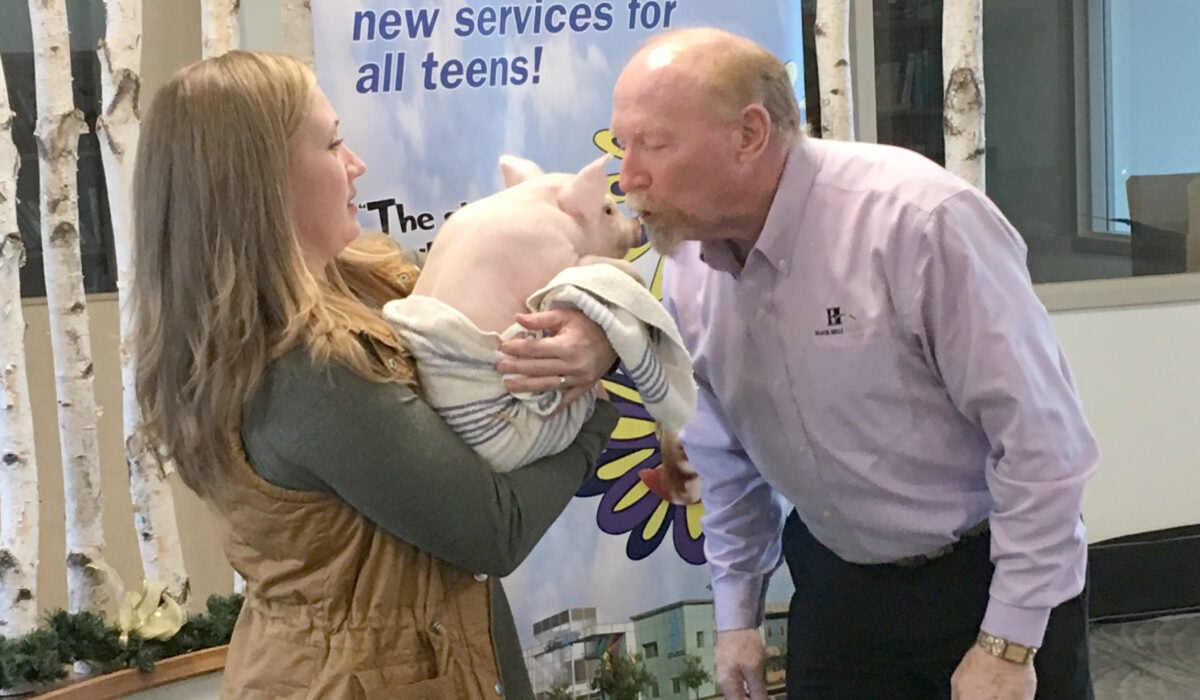 Dan Maguire kissing a pig as part of a fundraiser to raise money for the employees of Wellspring to have a staff retreat and team building day.

‘I needed the right support’

“I was able to become a successful and contributing member of society,” Maguire said, “but I needed the right support. WellFully provides that support, both physical and physiological, to help these youths follow the same path I did.”

WellFully’s addiction unit is licensed to help as many as 15 patients at any given time, while up to 18 kids can live in the coed group home. An outpatient drug and alcohol program supports 20 participants, and a psychiatric residential treatment program is able to serve eight girls. 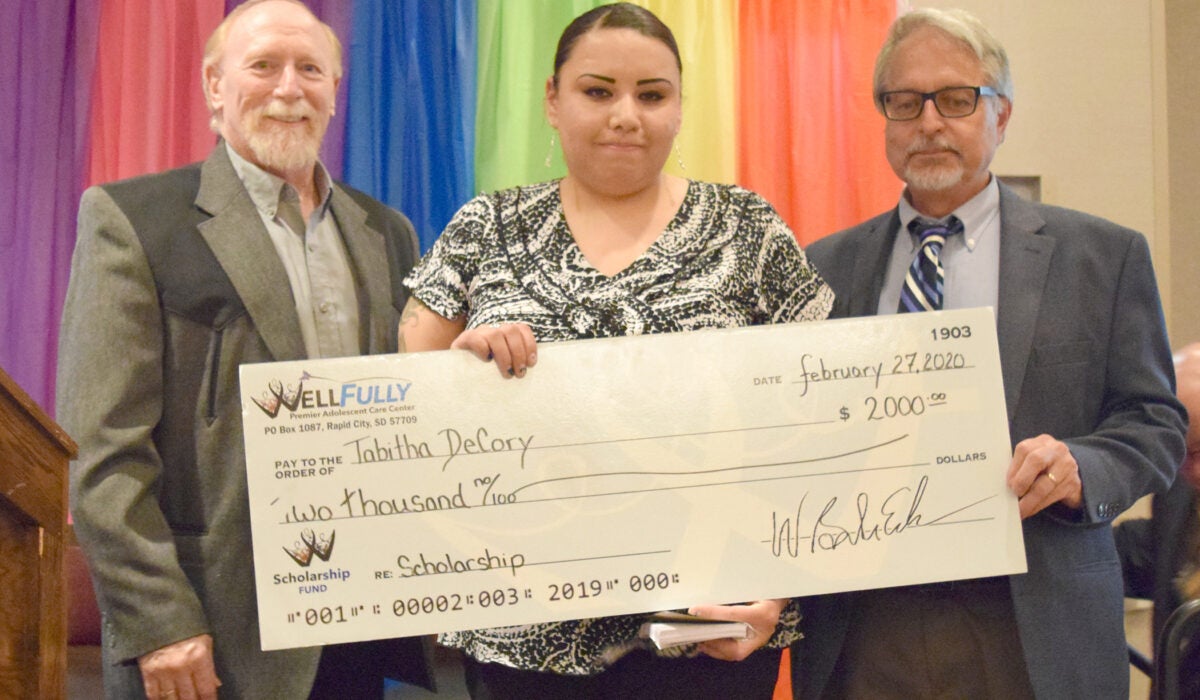 Dan Maguire and a coworker presenting a WellFully scholarship at the "We Believe In Kids" benefit dinner to the 2020 recipient who is an alumnus of Wellspring and is working on her Bachelor's Degree in Social Work at a local college.

And every bit of that capacity matters more than ever now, according to WellFully CEO Burke Eilers. “Families are experiencing financial stress, and youth are struggling,” he said. “For teens, socializing with peers is such a critical element of everyday life, and limiting that has caused trouble. We’re starting to see the impacts of this surface at an alarming level.”

A 2020 Make More Happen Award will help mitigate that impact. A donation of up to $10,000 from Liberty Mutual and Safeco on behalf of Black Hills Insurance Agency is included with the award—which Eilers said will go toward funding 250 hours of mental health, addiction or trauma counseling for WellFully patients. 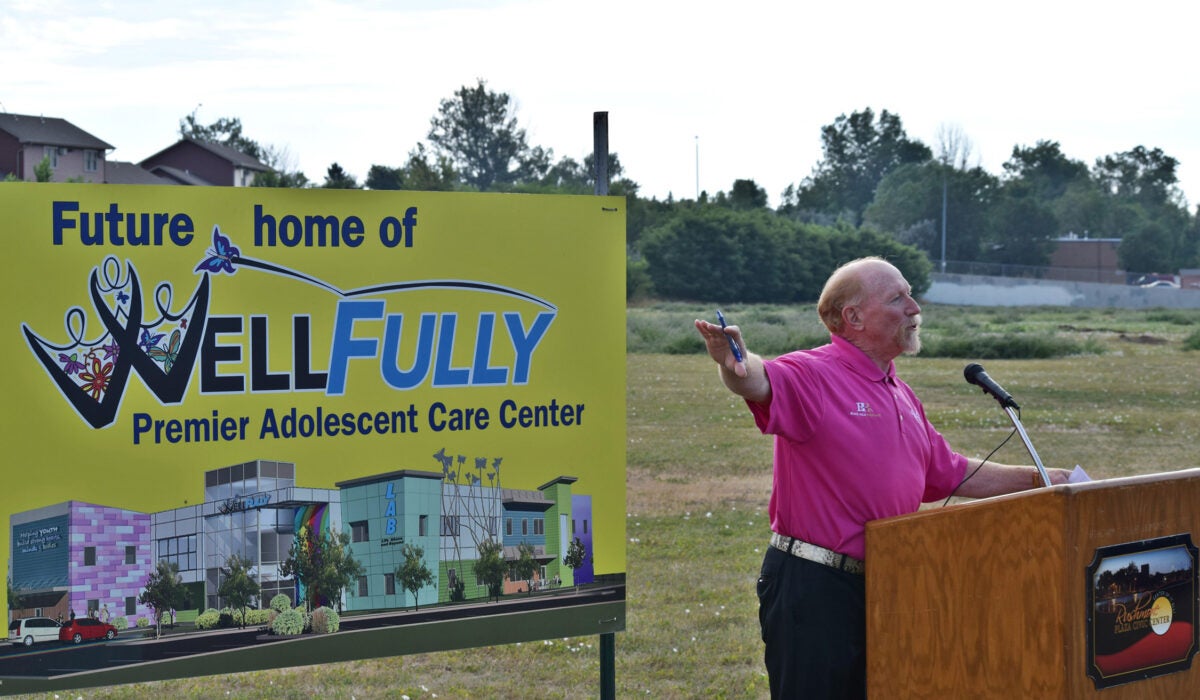 Dan Maguire is pictured speaking at the groundbreaking for the new WellFully facility, which was completed in 2019. Maguire tirelessly advocated for support and funding during his tenure as President of the Board.

“This award and grant is just one of the countless ways Dan has helped us,” Eilers added. “He has personally made the lives of these kids so much better.”

That’s the true reward for Maguire. “I have been blessed to share my experiences with the children at WellFully for 14 years now. They are struggling with addiction, just like I did,” he said. “To be able to give them a glimpse of hope, to see the light of life come back into their eyes, is truly a gift for me as much as it is for them. I’ll never be able to repay it in my lifetime.”

Use the Facebook button on the left to share this story and help WellFully receive a $10,000 donation on behalf of Black Hills Insurance Agency. Then learn more about these Make More Happen Award winners:

I’m so proud of Dan Maguire and all the work he does in our community. He knows how to pay it back and forward. He is a great example to us all.

what an inspiring story!

How awesome I didnt know about this facility