Mesa, AZ 352 Votes
Insurance Professionals of Arizona (IPA) agent Amanda Carlson helps a mare that was rescued from the Ocotillo fire in Cave Creek, AZ by spraying her with fly spray.
How to Vote?
FacebookTweetLinkedIn
2 Comments
How to Vote?

Insurance Professionals of Arizona (IPA) agent Amanda Carlson helps a mare that was rescued from the Ocotillo fire in Cave Creek, AZ by spraying her with fly spray.

After some helpful treatment from Amanda in its stall at Hoof and Paw Rescue, the Hoof and Paw staff checked and treated the mare’s eyes, which is why she has a fly mask on. This mare is underweight, has not been exercised, and has not had her hooves trimmed. The stress from the fire and the move to Hoof and Paw Rescue made her sick enough that the veterinarian had to come help treat her.

IPA agent Carlson is committed to helping these horses in need. She helps with calming horses that have had little human contact or that are afraid because of abuse or helps with follow-up care.

Her giving doesn’t stop there. Carlson has helped move dirt with her tractor, cared for animals, helped at fundraisers and is always referring everyone to Hoof and Paw for their next pet. She’s an advocate of education on animal abuse: identifying, reporting and saving animals that have no voice. Carlson has herself taken in desert tortoises,  a horse, dogs and cats in her effort to be part of the solution for animals in need. 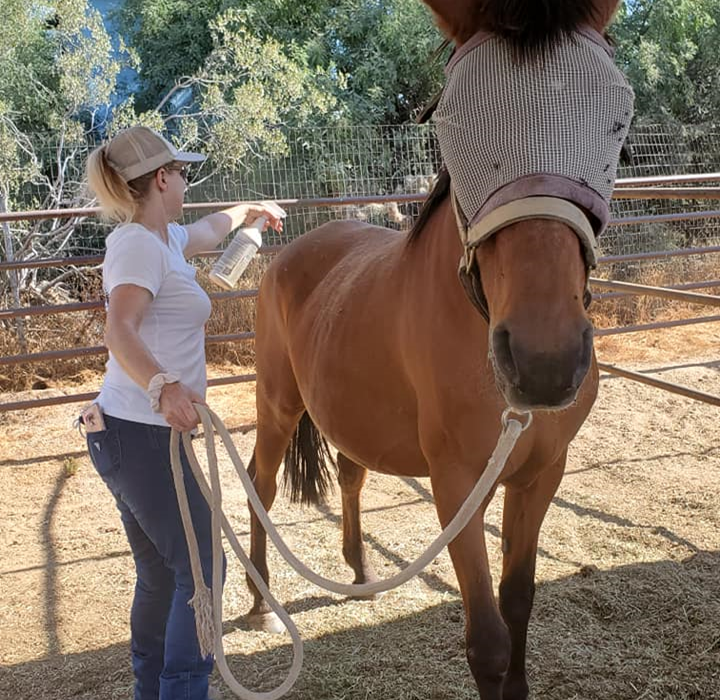 Thank you Amanda for helping those innocent sentient beings who suffer. Your love of animals shows by the time and effort you give. Great work!

Great work. Amanda has a heart of Gold and the size of Texas. Bless you for helping this Rescue keep on caring for Animals in need….