Milwaukee, WI 22253 Votes
After Robertson Ryan team associates spent the morning landscaping for the Elmbrook Human Society, They were rewarded with puppy cuddles! Read their volunteer story below.
How to Vote?
FacebookTweetLinkedIn
2 Comments
How to Vote?

Robertson Ryan & Associates in Milwaukee, Wisconsin, has been named a Change Agent—earning a $3,000 donation from Liberty Mutual and Safeco to Elmbrook Humane Society in nearby Brookfield, which provides shelter for homeless animals, promotes the human-animal bond, and prevents animal cruelty and neglect. Robertson Ryan Vice President Patti Blaschka has been involved with Elmbrook since 2006, and the agency has become a strong supporter as well. Here, she tells her giving story.

About 15 years ago, I took my rescue dog Chloe to the “Wag Walk,” a fundraising event for Elmbrook Humane Society. I didn’t realize it at the time, but it was the beginning of a long relationship with amazing people who are doing great work for animal welfare.

Supporting the people too

Many of my Robertson Ryan colleagues have gotten involved as well, and the company sponsors Wagfest. We have a special connection to Elmbrook—Heather Gehrke, the nonprofit’s executive director, is the daughter of one of our team members.

But I’m sure we would be involved anyway, because Elmbrook is such an asset to our community. They help re-home more than 1,000 domestic animals each year and they assist about 200 injured or abandoned wild animals annually.

It’s not easy work—not only do Heather and her team face the financial challenges of running a nonprofit, but constantly caring for these animals takes a lot of energy and compassion. So we try to support them however possible and be a bright spot in their day.

Some of our people work with Elmbrook throughout the year, while others contribute during our annual community service day (a paid day off for employees to volunteer). Our company also gives in other ways, such as an internal silent auction that benefits a different nonprofit each year. And we recognize the importance of giving with the Jack Ryan Community Service Award, named after one of our founders who was dedicated to volunteering. I was honored to receive the inaugural award in 2019.

The benefits go both ways, too: I’m the insurance agent for Elmbrook, and that relationship has helped me build a niche around insuring animal rescues across the country. In turn, I have clients who began supporting Elmbrook because of our work with them, especially at Wagfest!

It doesn’t even take a full day to have an impact—you can make a difference in just a couple of hours. When you find something you’re passionate about, you’ll quickly realize that the reward far outweighs the effort. And then you’ll probably find yourself giving even more of your time and energy, like I did after I first got started with Elmbrook. It’s well worth it, I promise. 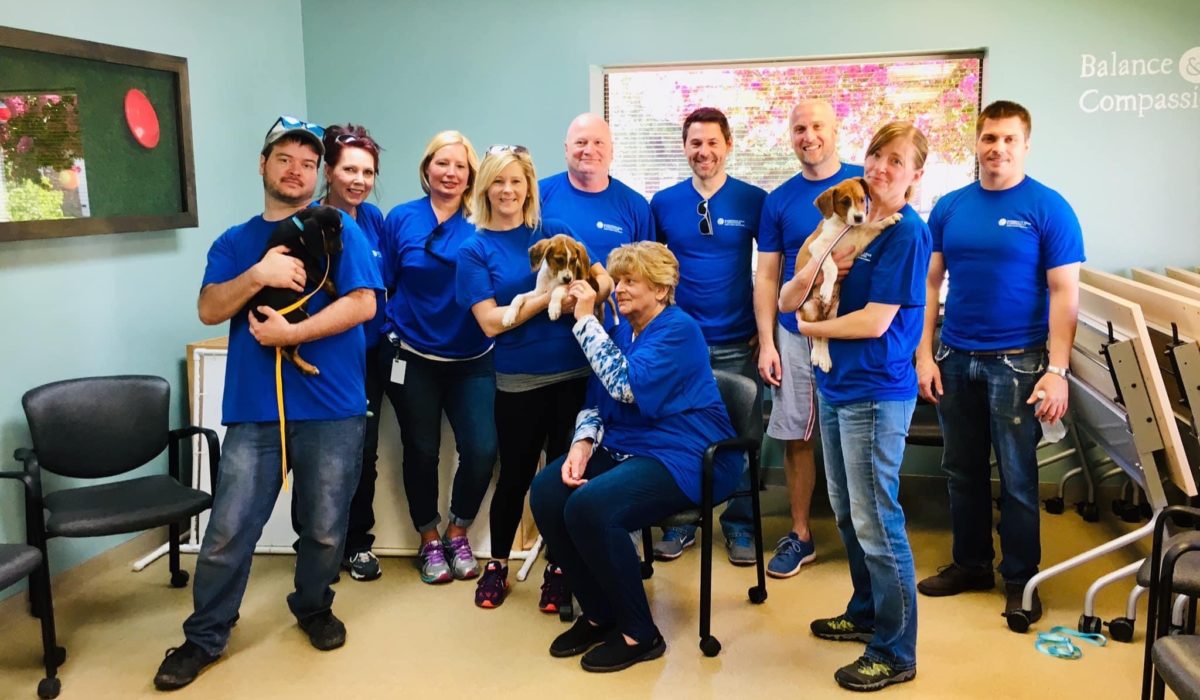 Kudos to Robertson Ryan & Associates, Liberty Mutual / Safeco and most of all to Elmbrook Humane Society for their tireless efforts toward animal welfare!