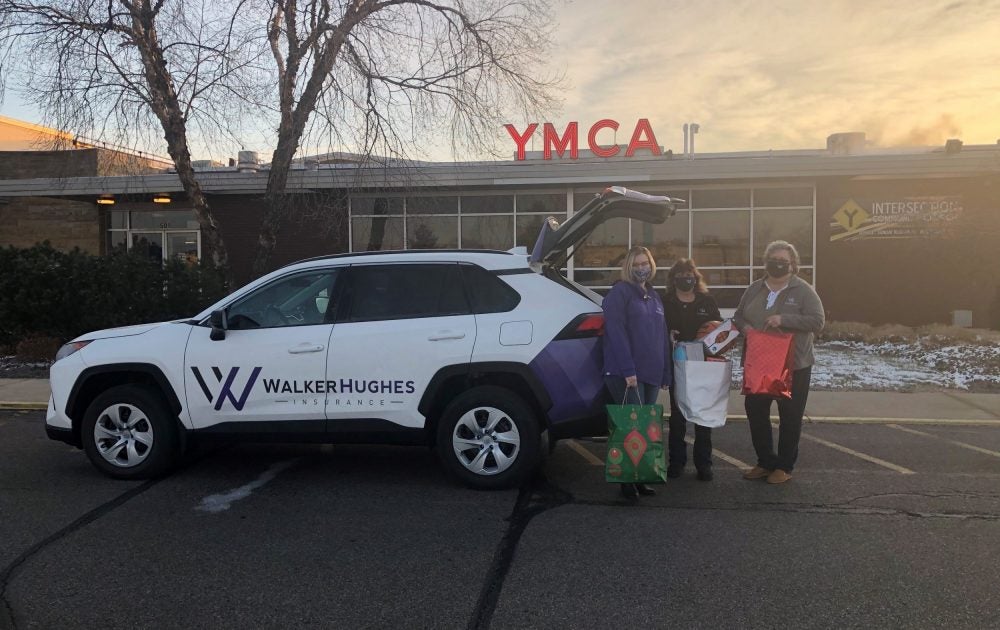 Improving a community for all ages

WalkerHughes Insurance reached their goal of 500 votes + shares and won a $10,000 donation from Liberty Mutual and Safeco Insurance for Harper J. Ransburg Branch YMCA on the east side of Indianapolis to further their mission to build healthy spirit, mind and body for all. Congrats to the team and thank you for supporting them!

Harper J. Ransburg Branch YMCA has been an anchor of Indianapolis’s east side for over 60 years, serving a diverse community of many age groups and walks of life. 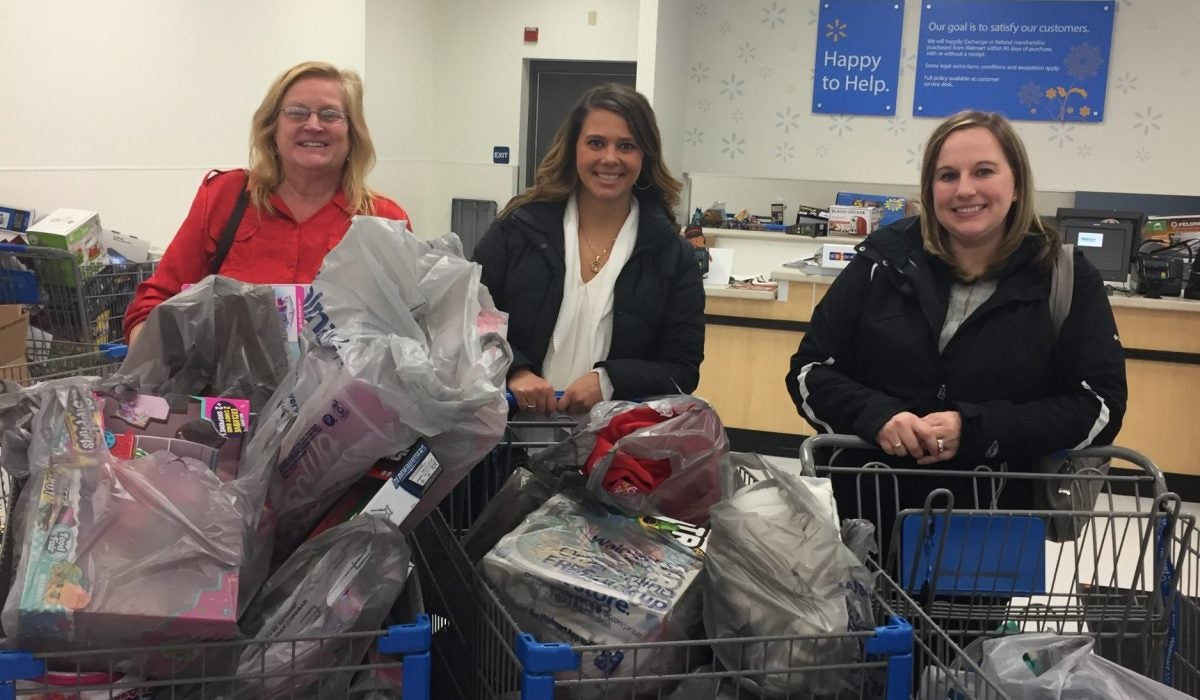 Members of the WalkerHughes team fulfilling their sponsored family’s wish list and getting ready to wrap the gifts in 2016.

Decades before the inception of WalkerHughes Insurance, Walker & Associates Insurance was founded by the late Doug Sr. and Joanna Walker. The Walker family joined the Ransburg YMCA in 1960, when the YMCA branch was just one year old, and have remained active members ever since. Their son, Doug Walker, grew up visiting the Ransburg YMCA and enjoying its youth programs. Today, he’s served on the organization’s Board of Directors for over 35 years – six of those years as Chairman of the Board. 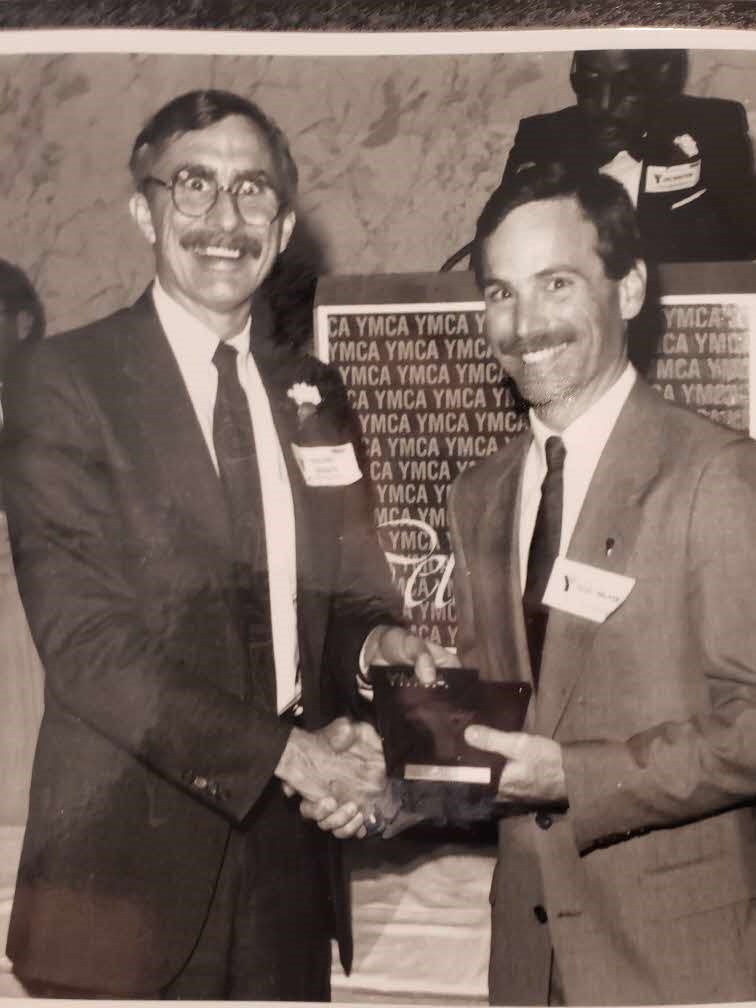 Estimated to be in the early nineties, Doug Walker (right) is pictured here receiving an award for his service to the YMCA over many years.

Initially introduced by the Walker family’s involvement, the agency’s team quickly established deep connections of their own to the Ransburg YMCA. With many members donating their time and personal funds, the branch is as special to the Indianapolis WalkerHughes office as it is to the surrounding community. 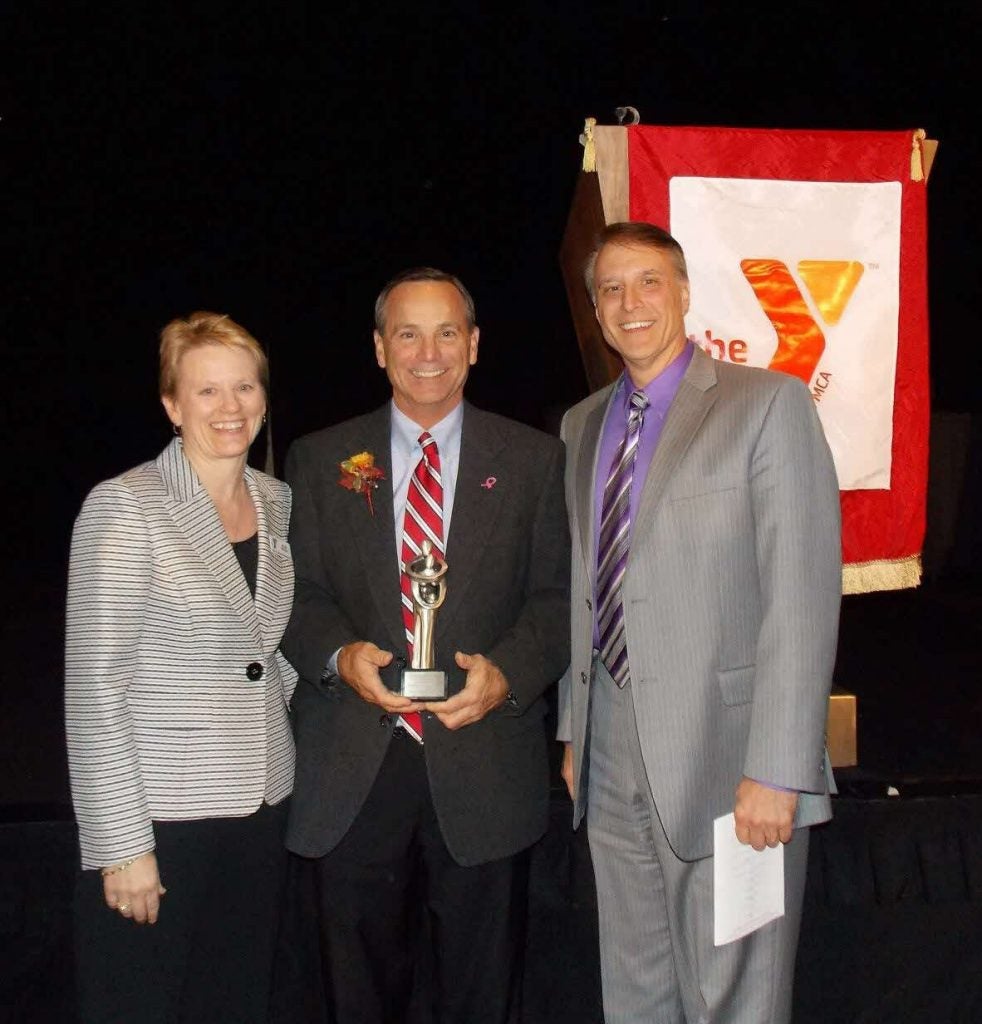 “The Ransburg YMCA provides a safe place for children and teens to grow and learn, and it provides a sense of community for our adults to stay healthy and prosper as well,” said Brenda Russell, customer service agent with WalkerHughes Insurance. “We love the opportunity to carry on Doug Sr.’s legacy, as the Ransburg YMCA meant the world to him.”

“The Ransburg YMCA provides a safe place for children and teens to grow and learn, and it provides a sense of community for our adults to stay healthy and prosper as well.” 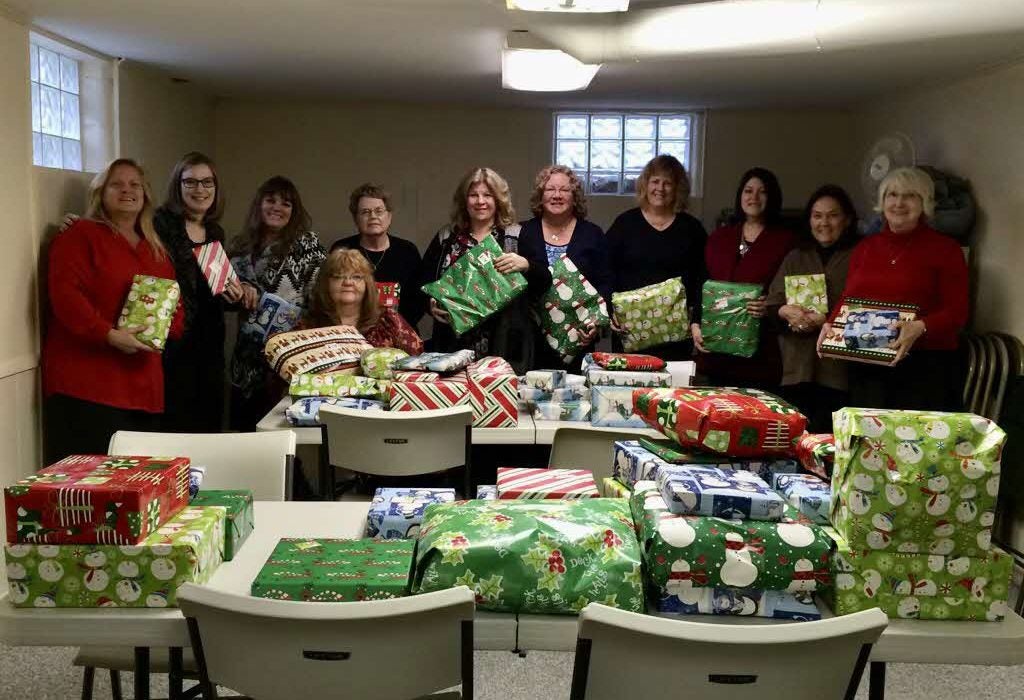 Giving back to a proud community

Ransburg YMCA provides crucial programming to a community where 30% of residents live below the poverty level.* 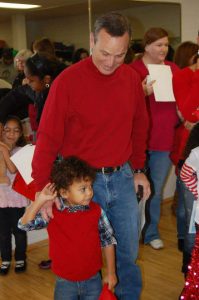 Walker and a grandfather, participating in Breakfast with Santa, with his grandson.

There’s a full-day licensed Early Learning Center for preschoolers, after-school basketball programs for teens, exercise programs for seniors and more. There are also large annual giving campaigns and regular community events, with which the WalkerHughes Insurance team is actively involved.

Typically, WalkerHughes sponsors the annual Good Friday community breakfast, multiple teams at the annual golf fundraiser and a family’s gifts every Christmas through the YMCA’s giving tree. “The WalkerHughes Insurance team has been part of Ransburg YMCA for over 60 years,” said Nancy Short, executive director of Harper J. Ransburg Branch YMCA. “They’ve had a huge impact on our programs and our community at large.”

Although COVID presented challenges and many YMCA events looked different in 2020, WalkerHughes Insurance is more dedicated than ever to supporting their diverse community that swells with east side pride.

“The WalkerHughes Insurance team has been part of Ransburg YMCA for over 60 years.” 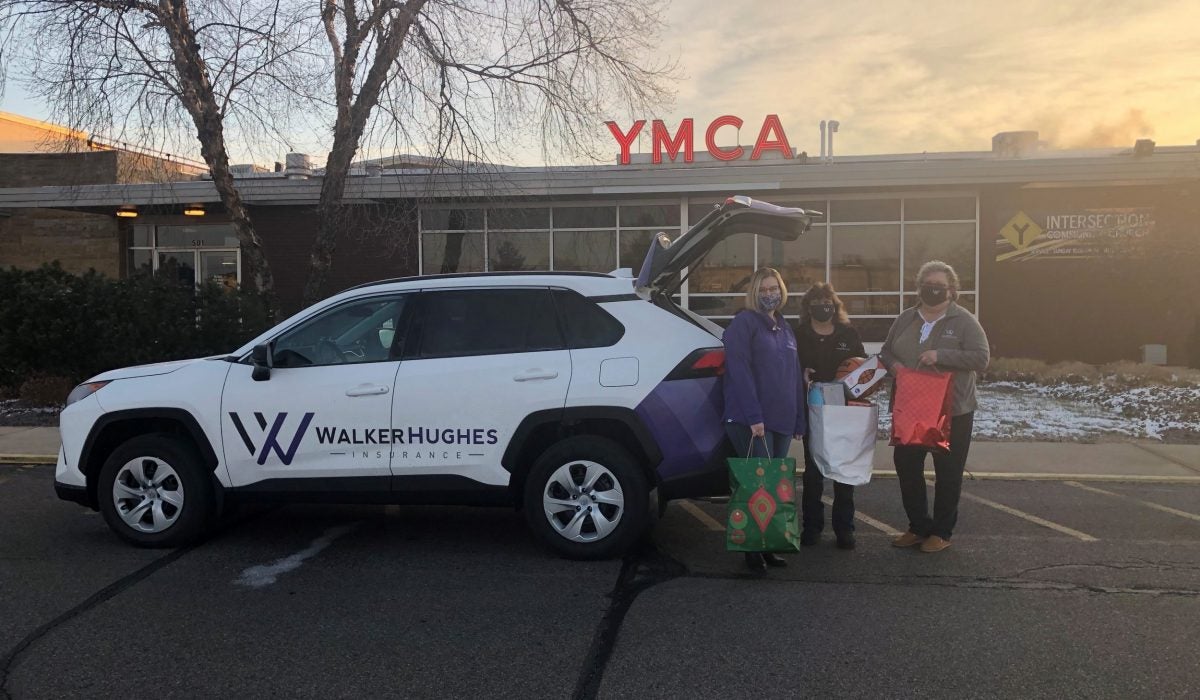 Members of the WalkerHughes team dropping off the agency’s donation to the 20th Annual Greater Indianapolis Toy Drive in 2020.

Many ways to help

Each and every program at Ransburg YMCA needs support and could benefit from a $10k donation. However, Ransburg YMCA would use the funds to provide 44 weeks of early learning education to preschool-aged children. “It would mean so much to our team to be able to present the Ransburg YMCA with a $10,000 check,” said Russell. “Seeing the smiling faces of all the children the Ransburg YMCA positively impacts says it all.”

Great job WalkerHughes! What a great cause to support.

Our quilting guild uses this YMCA community room – free of charge, but most importantly, we have been able to partner to honor our veterans over these past two years. This YMCA HAS HEART AND SOUL. Thank Walker Hughes for your support.

Ransburg YMCA does it all.
Its wonderful for the community

Ray Gage at Walker Hughes is the best agent and awesome to work with on our Work Comp coverage!

What an awesome story

It’s great to see such a long standing history of support between these two organizations!

The Ransburg YMCA does outstanding things on the Eastside!

I am so thankful for WalkerHughes and their faithful support of the Ransburg YMCA!

A staple in the community!

Love the Ransburg Y and appreciate all the wonderful things the Walkers have done for it!

We love the Ransburg Y!

Walker Insurance is a tremendous partner to the Ransburg YMCA

Great partnership with the Ransburg YMCA. The YMCA helps to build great relationships! Keep up the good work.

This is a real need

I love the YMCA! Ransburg has always been the best and friendliest!

My kids grew up in the Ransburg YMCA. Great place.

I appreciate the Y and all that they are doing for the community of course I vote yes.

Great story, proud to work with such a great team!

This is amazing! Love this story!

Proud to be part of an organization who supports our local communities. Thank you to Liberty Mutual and Safeco Insurance for helping us reach our goal!

What a GREAT organization! So glad to be a part of it and WalkerHughes! 🙂

This is a great story!

amazing work by this east side instution

What a wonderful model of community support, WalkerHughes Insurance!