A legacy of leadership

Oliver Insurance needs your vote by October 31 to win $10,000 for the Wayne Oliver Foundation. Read about the agency and nonprofit’s commitment to supporting the ALS Association and a variety of other local causes. Then vote for them by using the social media share buttons or by leaving a comment when you reach the end of this story.

A local force for good

The Wayne Oliver Foundation was founded in 2014 by Ryan Oliver following the death of his father, Wayne Oliver, the founder of Oliver Insurance. Wayne was a beloved philanthropist and business owner, and the foundation was created to honor his commitment to the business community, schools and youth sports programs of Canby, OR. It’s also a celebration and expression of Wayne’s ethic of giving back to the community in a variety of ways, large and small.

Since 2014, the foundation has distributed more than $90,000 to local entities such as the ALS Association of Oregon and SW Washington, the Canby Volunteer Firefighter Association, youth baseball and other causes.

The foundation’s main fundraiser is its annual golf tournament, the Wayne-O Golf Classic, which is organized and hosted by the agency’s seven employees. Now in its ninth year, the tournament raises money to support the local ALS Foundation chapter. Oliver Insurance employees also participate in the annual ALS walk and fundraiser to help raise even more money for ALS research.

In addition, the agency also donates $10 for every referral it gets from customers to a different nonprofit each quarter.

“All of us at Oliver Insurance are proud to celebrate and continue my father’s legacy of community service. He led by example and the foundation works to keep his generous spirit of giving alive.”

A commitment to kids 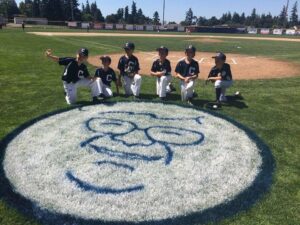 Oliver Insurance also has a special relationship with Canby Junior Baseball, an organization that Wayne supported for decades. Over the years, Wayne donated uniforms, volunteered as a coach and served on the league’s board of directors. In recognition of this unwavering commitment to kids, a Wayne-O logo patch – a sketch of Wayne’s smiling face, is sewn on the arm of each player’s uniform. In 2015, Canby High School rededicated the varsity baseball field to The Wayne Oliver Field, in honor of his impact to not only youth baseball, but the high school program as well.

Keeping the spirit of giving alive

I knew Wayne for years as his Safeco Rep in the 80s and he was all about the community then. This is a great legacy for him and wonderful for our (I eventually moved here…) community.

Well deserved! Wayne loved the community and helped many.

I did not know Wayne Oliver, but anyone who supports community and kids deserves my vote! Thank you Wayne for your service.

Such a great man and love that his legacy continues through The Wayne Oliver Foundation. Thank you!!

Great foundation! You get my vote!

Such a great such a great foundation! Thank you for all that you do.Let’s play ball!

Thank you for supporting our community!

This is an amazing way to support the community and children!

I appreciate all that my guy has gotten through canby jr baseball!

Thanks for supporting our community

Thank you for all of the support you give to the community!

You have my vote Team, Wayne Oliver!

Wonderful foundation! Thanks for everything you do in our community!

Such a great man and such a great foundation! Thank you for all that you do. We miss you Wayne-o!

Amazing family owned business that is so supportive of our community!!

Amazing organization that makes everyone family!

Thanks for supporting the kids.

You get my vote!

Thank you for supporting our kids!!

Thank you for supporting our community!

They get my vote!

Thanks for supporting our Kids!

Oliver Insurance and the Wayne-O foundation make Canby Junior Baseball happen. Thanks for all you do!

Canby is grateful for Oliver Insurance and all that they contribute to our community.

Thank you for always supporting our community.

Thank you for all you do for our community!

Thanks for all you do to support Canby Baseball!

Oliver Insurance has my vote!

Thanks for all you do to support Canby Baseball!

Such a great foundation and huge supporter of the community.

Thank you for all you do

Thank you for helping Canby Baseball!